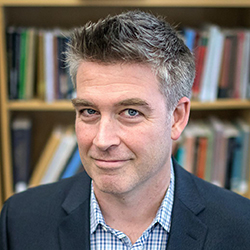 Morgan Pitelka received his B.A. in East Asian Studies with honors from Oberlin College and his Ph.D. in East Asian Studies from Princeton University. Before joining the UNC faculty, he taught at Occidental College (2002-2010). His scholarship and teaching focus on the history of late medieval and early modern Japan, with an emphasis on the samurai, tea culture, ceramics, cities, and material culture.

Tea Culture and the Politics of Display (室礼と床飾り):
From Sengoku Warlords to the Tokugawa Shoguns

Warrior leaders considered chanoyu to be a fundamental tool in their political activity throughout the turbulent years of the sixteenth century, and this continued in the seventeenth century under the rule of the Tokugawa shoguns. First Sengoku warlords, then the three unifiers, and finally the early Tokugawa rulers all emphasized the beauty and pleasure of tea practice while also utilizing tea gatherings to build alliances, create community, and cement relationships. In this presentation, I will examine changes and continuities in the display and decoration practices of warrior leaders ranging from daimyo like the Asakura, warlords of Echizen Province; to the first unifier, Oda Nobunaga; to the second shogun, Tokugawa Hidetada.

We will begin by examining the evidence for the display and decoration practices of Sengoku warlords, using sources such as the Manual of the Attendant of the Shogunal Collection (Kundaikan sōchōki), Record of Praiseworthy Famous Objects (Seigan meibutsuki), and early tea diaries such as Gathering Records of Tennōjiya (Tennōjiya kaiki) of the Tsuda family of Sakai and Gathering Records of Matsuya (Matsuya kaiki) of the Matsuya family of Nara. We will also consider the related functions of tea gatherings and other warrior social rituals including visitation ceremonies (onari), falconry expeditions, and banquets.

Next we will turn to the transformations in tea display and decoration as well as warrior social rituals under the three unifiers, with particular emphasis on Oda Nobunaga and Toyotomi Hideyoshi. This was a period of enormous creativity in tea practice, seen most notably in the activities of Sen no Rikyū, but I will argue that warrior patronage as well as the backdrop of civil war played an important role in the evolution of tea culture.

We will conclude with the display and decoration practices of the early Tokugawa shoguns. We will examine the activities of both tea masters and tea specialists who served the Tokugawa; we will consider changes in Tokugawa tea practice before and after the destruction of the Toyotomi in 1615; and we will look at the increased ritualization of tea display and decoration through the incorporation of tea gatherings into visitation ceremonies (onari) under the rule of the second Tokugawa shogun, Hidetada.

Underlying the entire presentation will be the basic question: what continued and what changed in the display of utensils in tea between the turbulent years of the sixteenth century and the relative peace and stability of the seventeenth century?