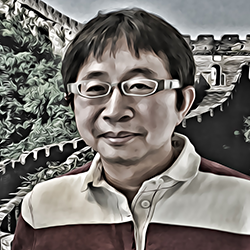 Chris Wen-Chao Li is Professor of Linguistics at the Department of Modern Languages & Literatures at San Francisco State University, where he teaches courses in general linguistics, Chinese language, and translation/interpretation. He has also taught linguistics and translation at National Taiwan Normal University and lectured on Chinese language and poetry at the University of Minnesota. In addition, he has served as Adjunct Professor of Translation at the Middlebury Institute of International Studies at Monterey and worked as a producer for the British Broadcasting Corporation (BBC).

“Tracing the Roots of ‘Tea’, ‘Cha’, and ‘Chai’: How Diachrony Informs the History of the Fragrant Leaf”

In the majority of the world’s languages, tea is known by a very limited number of names stemming from minor variation upon “tea”, “cha”, and “chai” – all of which are believed to have originated in Chinese. In this paper we trace the linguistic sources of these words, pairing the internal mechanisms of sound change and semantic drift with the external forces of population contact and language admixture to shed light on tea’s etymological origins, in the process illustrating how changes in language naturally accompany shifts in social practice and how linguistic roots inadvertently reflect the subject’s biological origins.

We begin with the European Age of Exploration and explain how the tea that travelled out of Amoy, Formosa, Hirado, and Macau via the trading companies of the Dutch, the English, and the Portuguese ended up with different names. We then look at the overland caravan routes of the Turks and the Mongols out of northwestern China and how, through the expansion of the Mongol empire, a unique moniker carrying a Northern Chinese diminutive suffix was spread to Central and Western Asia. We then examine the names for tea in Korean, Japanese, and Vietnamese—Sinoxenic languages that borrowed extensively from Sinitic over millennia and preserve multiple Chinese phonological strata in its many reborrowings, showing us how the pronunciation of “tea” in China evolved over time. We then explore Chinese dialect variation in the names for “tea” and posit plausible paths of change out of which this phonological diversity arose, using which we reconstruct a proto-form from which all present-day reflexes of the etymon are descended. Finally, we look beyond the Chinese language family to the roots of tea in the Trans-Himalayan region and show how speakers of certain Tibeto-Burman languages preserve what is arguably the earliest name for the tea leaf as well as its culinary and medicinal uses prior to its use as a beverage.