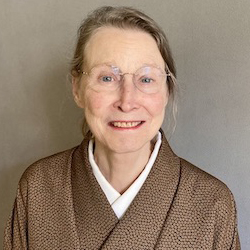 Christy A. Bartlett is the Founding Director of the Urasenke Foundation San Francisco office. From 1972 to 1981, she practiced chanoyu, or the Way of Tea, under Sen Soshitsu XV, fifteenth generation Head Master of the Urasenke Tradition of Chanoyu, at the Urasenke tearooms in Kyoto. The complex known as Konnichian has been designated an Important Cultural Property. Urasenke is one of the oldest traditions of chanoyu in Japan, tracing its lineage directly back to the brilliant sixteenth-century teamaster Sen Rikyu (1522-1591). In 1981, Dr. Sen dispatched her to establish the San Francisco office. For nearly forty years, the Foundation has energetically served the Northern California community with wide-ranging programs for museums, elementary and secondary schools, universities, and numerous community groups. Bartlett also travels throughout the United States providing similar master classes, lectures, and workshops. The core of the Foundation is a rigorous curriculum structured to serve all those whose hearts incline towards the Way of Tea. The student body at present comprises persons representing all ages, multiple backgrounds, and all levels of understanding. In 2002, Dr. Sen recognized her commitment to education and study in the field of chanoyu with one of its highest degrees, the seikyoju. Ms. Bartlett received her bachelor's degree in Art History (1987) and master's degree in Asian Studies (1993) from UC Berkeley. She continued advanced studies in the Graduate Division of East Asian Languages at UC Berkeley for several years. In 2010, Bartlett was honored to  receive the Japanese Foreign Ministerʻs Letter of Recommendation for contributions to understanding between Japan and the United States.

Listening to the Tokonoma: Word and Spirit
床の間を聴く：言葉と心

It was around the time of Rikyu koji, that is mid to late 16th century, that the scroll came to be the most valued utensil in the tearoom. Not the Chinese sumie paintings that were favored by warrior aristocracy, but the traces of ink forming words on paper brushed by religious figures and other persons of virtue. Initially certificates of enlightenment, grants of religious names, sermons on sutras and the like were hung in the tokonoma. These were in a horizontal format, yokomono, with multiple lines of right-to-left text, or sometimes with several large characters followed by smaller lines of explanation. Although there are some early examples of vertically oriented, single-line scrolls, not until the time of Sen Sotan, early 17th century, did this format become the standard image of a tearoom scroll. For ichigyomono, as this format is known, the calligraphers drew upon words from classic Zen texts or poetry. Such words are known as koan, a phrase or story that calls to be understood by means outside rational thought. Both yokomono and ichigyomono are used today.

In more recent times, Sen Soshitsu Zabosai, the present head of the Urasenke Tradition of Chanoyu, described the tea gathering as a place and time in which host and guest gather to discuss or to “work on” the koan proposed in the scroll. This is what I would like to think about today. What voice does the host hear when they select a scroll. By what process do the host and guest listen to the tokonoma. How does someone who does not read characters listen.

Perhaps we can look to the creation of the scroll to guide our listening. Writing koan phrases on paper is part of Zen priestsʻ practice. The act of moving the brush is a practice of Zen. Their own spirit is laid down with the ink. We may begin with the pure visual impact of ink on paper, what might be called a visceral reaction. Persons who do not read characters are able to read gesture. However when asked about the visual qualities of a writing, those who know characters want to voice the reading. They are vested in the abstract, intellectual aspect of language, and attention to the meaning of the words comes as a second step. Often flowers known as chabana stand with the scroll. Their expression of the concrete natural world is yin to the scrollʻs abstract yang. The character and posture of chabana will be looked at during this talk as well.

Listening to the tokonoma proceeds with the first guest asking the host, “Please read the scroll for us.” This request does not at all imply an inability to read it. Rather it is an invitation for the host to relay, after a literal reading of each character in the phrase, their own feelings, thoughts, interpretations, and other information regarding the scroll. If the words come out of an anecdote, we want to hear it. If the words are part of a couplet or longer poem that too is forthcoming. To whom are the words attributed. What later priest commented on the phrase or story. Who is the calligrapher and what were their historical circumstances. What are the guestsʻ reactions to the scroll and its context. The discussion will involve both the participantsʻ immediate responses, responses from their memory, and received perceptions from the past. One of the amazing aspects of listening to the tokonoma is that feeling of having a dialogue with the past. The author of the words and the calligrapher, even if active hundreds of years ago, are as present as any in the room.

This combination of written word, spoken word, historical reading, immediate reading, past and present, lead those in the tearoom to the spirit of the scroll. The flowers too may play a role in the spirit of the tokonoma. Letʻs take a look at some specific tokonoma settings throughout the  year.